The Fabulous Beginnings of Phi Mu

The Fabulous Beginnings of Phi Mu

Two words. 5 letters. Say it and I am yours.

There you have a bid.

But before you have a bid lets back up a bit, maybe you should actually know something about Phi Mu and its history.

As the second oldest sorority in the United States I’d say it is pretty interesting, and you would be selling yourself short to not learn about this fabulous organization. Let’s go all the way back to the very, very beginning of this sorority.

Let’s talk a bit about where Phi Mu was created. Phi Mu was established at Wesleyan College in Macomb, Georgia in 1852. This was the first ever Phi Mu chapter in the nation. Today Wesleyan is still an operating educational institution but sadly does not have Panhellenic Sororities. But, Wesleyan was the first college to give women the opportunity to earn bachelor degrees (it was about time!) This was the first institution to give women this opportunity at a time when society thought women were not suited for college. Oh, if they only knew how women would one day conquer the world... thanks for that one, Wesleyan! Wesleyan is also proud to be the home of the first ever sororities in the United States- Alpha Delta Pi and Phi Mu. Since both of these sororities were established at the same college they are considered “Macon Magnolias.” 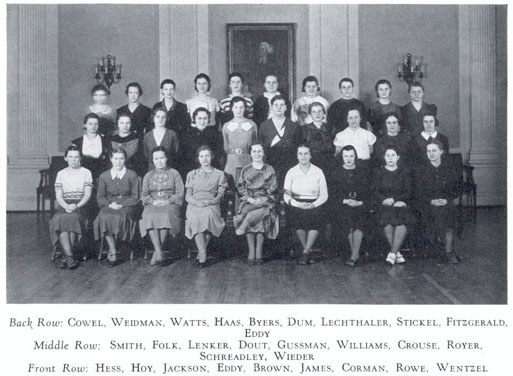 Going back to 1852 when Phi Mu was becoming Phi Mu. Yes, that was a long time ago, 165 years to be exact. A lot has changed since the days when three young girls came together to form this secret society. The organization did not originally start out as the two, Greek letters Phi Mu. In the beginning the organization was called the Philomathean Society.  A Philomathean Society is a literary society because the Greek word “Philomathean” means “lover of learning.” This secret society was created on January 4th of 1852, and then was publicly announced as an organization on March 4th of the same year. Today the members celebrate the founding of their organization on March 4th. Mary Ann Dupont Lines was the head-honcho, alpha female of the secret society. Mary Ann’s father was a fan of Wesleyan’s supervision over the girls while they were attending, so off she went. Mary Ann’s father had gifted her a twenty dollar gold piece which was used in the making of the first ever Philomathean badge in 1852. Mary Ann’s great, great granddaughter is a Phi Mu in Florida.

Mary Elizabeth Myrick Daniel was the oldest of the three founders but was also the most reserved. She chose to get married on March 4th in 1857- in observance of the anniversary of the founding of Phi Mu/Philomathean Society. She would definitely be risk management. Always lurking.

Martha Bibb Hardaway Redding was known as Bibb. She was the youngest of the three girls but the most spirited. I would be willing to bet that she would be the social chair today! She was a late bloomer in the marriage department for her time, she did not get married until 24, so her friends called her an “old maid.” Man, how times have changed.

Phi Mu is rich in symbols, both images and words. Their pillars are love, honor, and truth. These are the basis for their creed and what drives chapter members and bonds alumnae. Speaking of bonds, this special relationship sisters have with one another is taken seriously to Phi Mu’s. Common symbolic words for the sorority are “Love in our bond,” this is a phrase Phi Mu’s use when speaking to other members, mostly in formal and written communication. Their open motto is “Les Soeurs Fideles” which literally translates to The Faithful Sisters. They have a closed motto as well which is only revealed to initiated members (ooooooh, secrets are fun!) Their official mascot is a lion called Sir Fidel. Lions are even depicted on their coat of arms. They even have some fun unofficial symbols such as pineapples and ladybugs. You might have hears the term “Phi Mu pink” but that isn’t technically correct. Their colors are rose and white and dates all the way back to the Philomathean Society days. They’re symbol and hand sign is a quatrefoil. The reason behind this is a guarded secret and heavily involved in their rituals. The quatrefoil is scene on their badge in black and gold that initiated women wear. Their official flower is a carnation. Specifically an enchantress carnation. Today Phi Mu’s have a tradition of trying to incorporate a hidden carnation in their wedding bouquet to honor their lifelong membership and sisterhood. Today Phi Mu is a thriving organization with 123 collegiate chapters across the United States and there are more than 180,000 initiated Phi Mu’s in the world. That is a whole lot of throwing what ya know!

Now you know the ends and the outs of Phi Mu and how exactly they came to be.

As any true Phi Mu lady would say,